The Dumbbell Nebula (also known as a Messier 27, M 27, or NGC 6853) is a planetary nebula in the constellation Vulpecula, at a distance of about 1360 light years. It has a large angular diameter as a planetary nebula, about 8 x 5,6 arc minutes. (Rarely imaged outer halo is not included, it can be seen in my image. With an outer shell, the diameter is nearly 30', a size of the full Moon.

Planetary nebulae are shells of gas shed by stars late in their life cycles after using up all of their nuclear fuel. The star then ejects a gaseous shell, which is illuminated by its extremely hot central star, a core left from the original star. n this image, the central star is clearly visible at very center of the nebula. M27's central star has a magnitude of 13.5 and is an extremely hot blueish dwarf with a temperature of about 85,000 K.

Our own star, the Sun, is expected to undergo the same process in a couple of billion years.

Image is shot with a QHY9, Baader narrowband filter set and the Meade lx200 GPS 12" telescope. 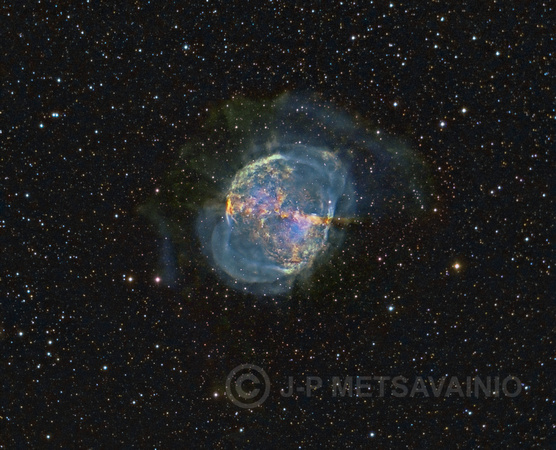