Home»Artworks based on my astrophotos, BUY PRINTS

IC 59 and IC 63 at the distance of about 600 light years in the constellation Cassiopeia.
Image spans about 0,8 degrees vertically, that's about ten light years at its estimated distance.
IC 59 is at left edge of the image and IC 63 at middle. Nebulae are ionized from the ultraviolet radiation of hot, luminous star gamma Cas at upper right it locates only three to four light years from the nebulae.

C 63 is a combination of emission and reflection nebulae. Since this is a narrow band image, reflection component is not get captured due to a broad band nature of it. Instead there is an ionized Oxygen, O-III, in this image and it can be seen as a Blue.
Nebula is next to the Gamma Cassiopeiae, a bright, mag. 2.47, star in middle of the "W" asterism in constellation Cassiopeia.
J-P Metsävainio 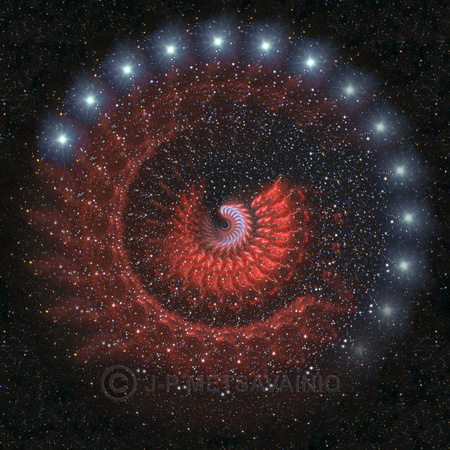