A narrow band and broad band luminance mix image of the M57 as a bi color, H-alpha & O-III, composition.Not too commonly imaged outer halo structure can be seen in an image. There is least two layers of it, outer one is faintly seen in this image. A clear O-III signal is visible in a first layer of outer halo.
The halo was clear in H-alpha channel and there was some hints of it in luminance one.

Ring Nebula, M57, NGC 6822, locates in constellation Lyra, near a very bright star Vega. This planetary nebula lays about 2300 light years away from the Earth and has a diameter of 1,3 light years.
The small angular diameter, 230" x 230", makes this target difficult to image. The central white dwarf of planetary nebula nucleus is seen in an image as a Bluish dim star, visual magnitude is 15,75. Star was visible only in O-III channel and luminance channel.
Technical details: 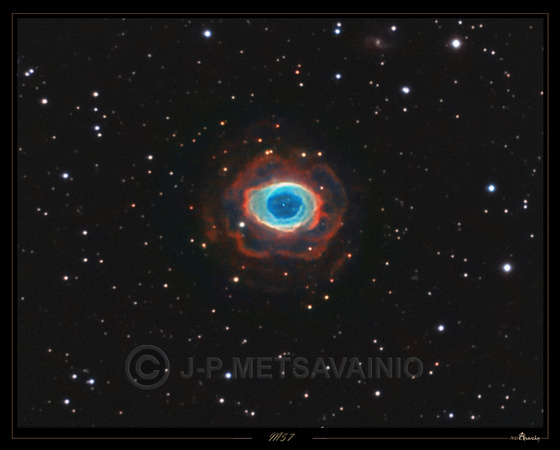