The Crab Nebula supernova remnant locates in constellation Taurus. The actual, bright, supernova was seen by Chinese and Arab astronomers in 1054.
Distance from Earth is about 6500 light years and diameter of the nebula is about 11 light years. Supernova remnant expands at a rate of about 1500 kilometers/second.

Last night I shot S-II channel and, for the first time, broadband luminance to show the broadband component in the nebula. There is a, 30 rounds per second spinning, massive, very magnetic, neutron star in the core of the M 1. The hot plasma strikes existing gas, causing it glow in colors across the electromagnetic spectrum. Without broadband luminance, I can show only a part of the nebulas appearance. 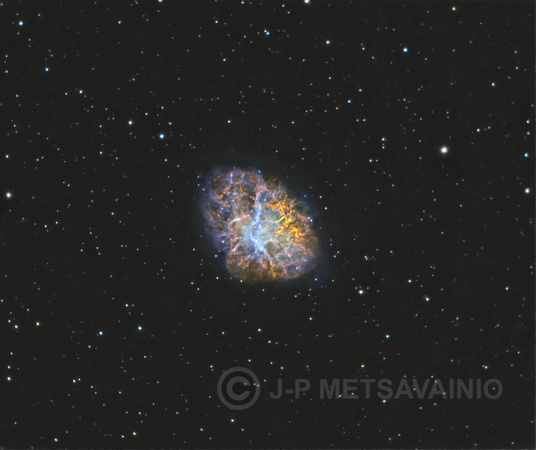